Last week we visited the experimental agricultural extension of the University of Bologna, where the researchers of the Department of Agronomy are conducting the field trials of the BECOOL project. 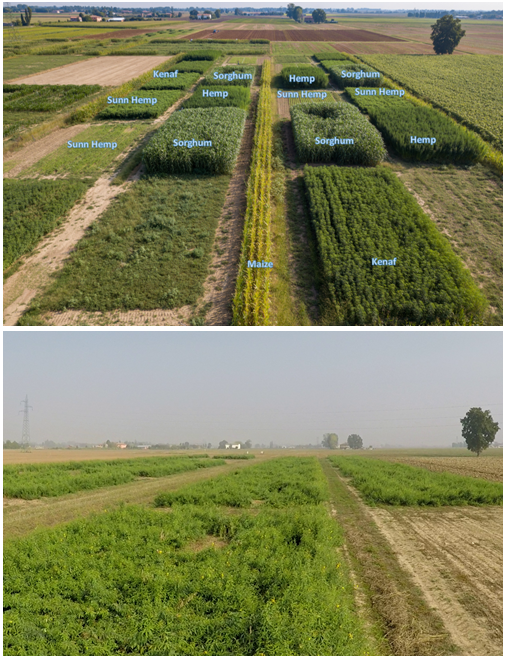 Part of the trials are aimed at assessing the performance and the effects of annual energy crops (fibre sorgum, kenaf, sunn hemp, hemp) grown in rotation with traditional food crops (wheat and maize).
According to the multiannual experimental rotational scheme agreed and replicated also by the BECOOL partners in Greece and Spain, this year Sunn Hemp (Crotalaria juncea) was cultivated on the same plots which were used in the summer of 2018 for growing different food and energy crops (image right)and subsequently cultivated with wheat in the winter 2018-2019.
Wheat was harvested in the second half of June 2019, and sunnhemp was sown in mid-July, with only a light tillage and minimum irrigation after the germination and the emergence of plantlets.
We visited the farm in mid-October on the day of the harvesting of Sunnhemp. The research team is now quantifying the exact biomass yield and other quantitative parameters, the results will be available soon. Nevertheless, some very interesting aspects of this crop are clear from the simple eye-witnessing. With less than 90 days of growth cycle in one of the hottest summer seasons ever recorded, Sunn hemp crops had completely covered the soil and the plants had reached at least 1,5 meters of height by the harvesting time. The roots showedabundant presence of nodules, an evidence that the crop (a legume) had developed its nitrogen-fixing activity during the summer. Later this year, soil analysis on those plots will tell how much nitrogen was actually left in the soil for the subsequent crop, however, researchers expect confirmations that the long-term benefits for the soil of Crotalariagrown as a summer cover crop, are not limited to nitrogen only, but comprisea more general impact on soil fertility. The remaining roots of the lignocellulosic crops after the harvest certainly help to increase the content of organic matter and in addition, Sunn hemp is anematocide crop, thus helping to kill harmful parasites for traditional crops, with a significant reduction of use of pesticides. Last but not least, this year the harvesting was performed with a standard mowing and baling equipment, often available in most conventional farms, a further evidence that this crop does not require a special mechanization, but in fact it could be easily cultivated in a common farming system
While waiting for the official results of this year’s experimental campaigns in Italy, Greece and in Spain, these results clearly indicate that Sunn hemp shows a concrete potential as a lignocellulosic biomass crop (for energy, fibre or materials) grown in rotation with traditional food crops in a sustainable farming system. The BECOOL consortium now hopes to conduct chemical analysis and conversion tests of samples of sunn hemp biomass to assess its suitability as a potential feedstock for gasification, pyrolysis and fermentation to ethanol.