Gasification of liquid intermediates to syngas

One of the routes to produce advanced biofuels from biomass under investigation in the BECOOL project, involves the fast pyrolysis of biomass into a liquid intermediate energy carrier, followed by the gasification of the liquid to form syngas, from which the biofuel is synthesized. This route gives advantages in solving logistical challenges associated with biofuel production from biomass, as well as providing some technological advantages like separating the inorganic (ash forming) elements prior to the gasification stage and making it easier to enable pressurized operation of the gasifier, to avoid syngas compression.

As part of the thermochemical experimental activities of BECOOL project, in 2020 samples of giant reed, fibre sorghum and eucalyptus were converted to fast pyrolysis bio-oil (FPBO) by VTT in Finland and the bio-oil was then sent to BTG in the Netherlands, for bench scale gasification tests.

The three types of FPBO were gasified in an autothermal catalytic reformer, at a temperature of around 900 °C in the partial oxidation zone and around 800 °C in the catalytic reforming zone. A good quality syngas was obtained from all the three feedstocks, containing roughly 50 vol.% H2, and the remainder almost equally distributed between CO and CO2. The H2/CO ratio was near 2:1, which is a good parameter for subsequent Fischer Tropsch synthesis. The average syngas production was around 50 mol (H2+CO)/kg FPBO, which corresponds well with the theoretical maximum.

These promising results indicate that the final gas composition is almost independent of the original biomass used and therefore confirms the possibility to design feedstock flexible advanced biofuels value chains, which is one of the research goals of BECOOL.

Photograph of the autothermal catalytic reformer (~2 kg/h) in the BTG laboratory. 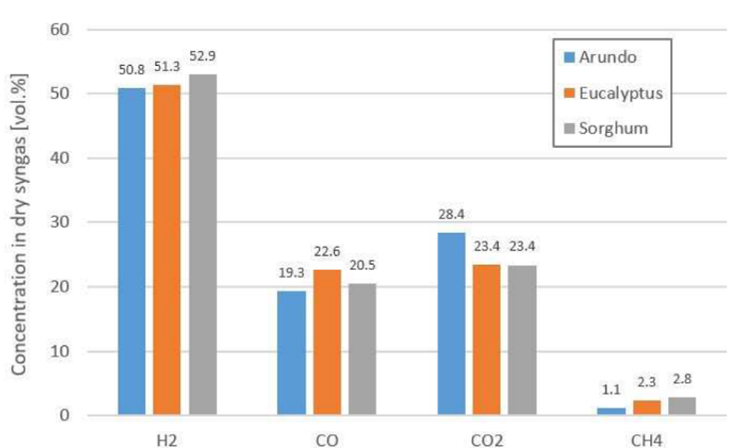 Syngas composition produced from the different types of  feedstock.