BECOOL is validating a comprehensive strategy which integrates energy crops and intercrops within traditional food rotations, so that the development of both energy and food crops may increase land exploitation without degrading soil quality and influencing food/feed demand. One of the rotation strategies being tested in Spain by BECOOL partner CIEMAT alternates wheat as food crop with Sunn hemp (Crotalaria juncea L.), a legume that can be grown as fibre crop or energy crop. The trials have been conducted in the municipality of Guadajira (Extremadura), a region characterised by a continental climate, with cool, mostly damp winters and hot, dry summers.

The wheat- sunn hemp rotation was tested in four plots of 120 m2 each: the leguminous crop was sown on the 21st of 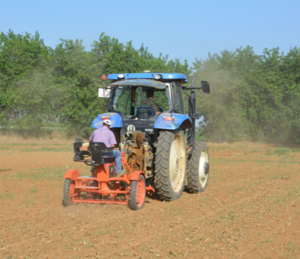 June and harvested at the end of October using commercial harvesting machines. Irrigation was required due to the severe drought of summer 2017. The results obtained include data on productivity, soil and biomass characterization as well as an energy balance. The average production was about 5,900 kg d.m./ha, slightly lower than expected due to damages by wild rabbits and low rainfalls. With better meteorological conditions, and control of wild animals an increase of the yield is expected by next year.

Soil productivity analysis has been conducted before and after Sunn hemp cultivation, determining pH, organic carbon (SOC), nitrogen and phosphorous. Analyses were also conducted for biomass characterization, the parameters analysed were humidity; C, H, N, High Heating Value (HHV), P, K, Ca and Mg. Finally, an energy balance and life cycle assessment were conducted.
The total primary energy consumption for Sunn hemp cultivation was 35 TJ/ha and irrigation was the most energy-intensive phase (more than 70% of the total). Nevertheless, the energy balance showed that the crop produced about 3 times more biomass energy than the energy required for its cultivation. The energy yield will be increased by means of future adjustments related to irrigation and fertilization steps.

This post is based on the paper Sunn Hemp, A Promising Leguminous Energy Crop As Inter-Cropping System: Preliminary Results For Spain by Carlos M. Sastre et al. presented at the 26th European Biomass Conference & Exhibition. The full paper is available open access in the official proceedings of the conference.