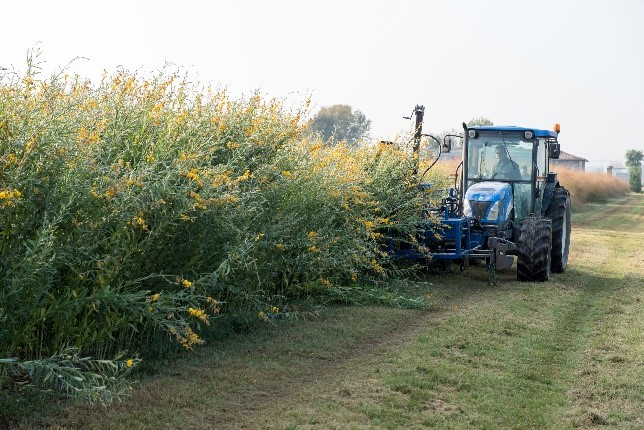 The large-scale deployment of advanced biofuels is a fundamental tool to reach the objectives of the REDII for the decarbonization of the transport sector by 2030, as well as for the EU long term goal of net-zero emissions by 2050. In addition, the EU Green Deal puts the agricultural sector at the centre of the green transition and urge it to find solutions to supply large volumes of lignocellulosic biomass for the circular bioeconomy, while increasing soil health, and developing environmentally friendly food systems.

An effective way to achieve this is by developing integrated cropping systems, where innovative annual lignocellulosic crops can be introduced within crop rotations gaps, alongside traditional food crops.

Sunn hemp (Crotalaria juncea L.), is a fast-growing, high lignocellulose, multipurpose leguminous crop of Indian origin. In tropical areas it is traditionally used as a forage crop or as green manure and is normally grown in rotation with rice, wheat, tobacco, and sugarcane. However, little is known so far about its suitability as a crop for temperate climates. To investigate this aspect, between 2016 and 2017 researchers at Department of Agricultural and Food Science of the University of Bologna, conducted three independent one-year field trials at the experimental farm of the University. The tests aimed at evaluating the performance of a series of Sunn hemp cultivars at different harvesting times, in addition to the effects of different planting densities and soil tillage methods.

Results showed that regardless of the cultivar used, sunn hemp can produce acceptable biomass yields up to 11.5 tons/ha dm, under no-tillage conditions and with sowing at 45 cm row distance, in as little as 90 days between sowing and harvesting (at the flowering stage).

These preliminary results indicate that introducing sunnhemp as a lignocellulosic biomass crop within traditional cropping systems in temperate climates can be feasibile.

Besides representing a potential source of biomass for advanced biofuels, compliant with the criteria for low- ILUC risk feedstocks, Sunn hemp as a leguminous species has positive effects on soil fertility in terms of nitrogen fixation and is also effective in contrasting root nematodes and weeds. Thanks to the combination of all these features the cultivation of Sunn hemp as a cover crop can then represent an interesting solution to support the goals of the REDII, for low-ILUC risk advanced biofuels, as well as those of the EU Farm-to-fork strategy and ultimately of the EU Green Deal.