The BECOOL project aims at developing innovative solution within European agricultural systems to produce lignocellulosic biomass for advanced biofuels. The project assesses different value chains from several biomass resources. One of the research components of BECOOL focusses on increasing the efficiency of recovery of lignocellulosic biomass from the unused residues of traditional crops, such as chaff, maize cob, and tree prunings.

In this context, researchers at Italian CREA (Consiglio per la Ricerca in Agricoltura e l’Analisi dell’Economia Agraria) have conducted trials to assess the performance of an innovative mechanized system to collect maize cobs. Given the maize current production in Europe, more than 9 Mt/y of maize cobs would be available for energy, farming, fertilization and other purposes. Maize cobs are considered to have a very limited nutritional value for the soil or as animal food. Since they are rarely used, being generally left uncollected on the ground, or collected with the entire stover, they could represent a valuable feedstock for energy or for bio-based products. 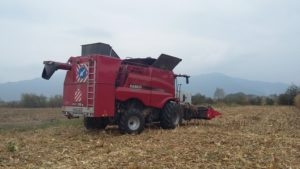 The tests were conducted using a commercial combine harvester machine equipped with the innovative Harcob system and were performed during maize grain harvesting in September 2017. Results showed it was possible to harvest 2 t/ha of cob, with a material capacity of 4.1 t/h. An important question is how to separate cobs from grain in a fast, efficient and cost-effective manner. The unloading operation was performed by an innovative auger system that ensured no blocking problems, allowing the discharging of maize cob and grain at the same time. Additionally, cob losses were lower than 20%, with an average level of about 16%, lowering this value is a challenge that can be easily tackled by optimizing the machinery. The final product is a biomass resource with a high-level moisture content (49,1% on the average), which makes it a perfect feedstock, for example, to be fed directly into an anaerobic digester, or dried for animal bedding. To conclude, the Harcob system has been proven as a viable solution to exploit the hidden potential of these untapped resources.

This post is based on the paper Maize Cob Harvesting: First Assessment of An Innovative System by L. Pari, S. Bergonzoli, A. Suardi, V. Alfano, A. Scarfone, S. Lazar. The paper has been presented on the occasion of the 26th EUBCE (European Biomass Conference & Exhibition) 2018. The full paper is available open access in the official proceedings of the conference.